Coinciding with my article in Architectural Record on the new hospital in Móstoles by Rafael de La-Hoz (see blog entry of March 3rd, Therapeutic Space), I was asked to write one of the introductions to a book on the project published by Q! Estudio and sponsored by the builder.

This story is particularly important to me for two reasons. The first, my final thesis project at Columbia University's School of Architecture, way back in 1979, was for a hospital.  Working with a small group of fellow-students, we explored different aspects of the idea of therapeutic space under the direction of Klaus Herdeg, who had recently returned to the school after undergoing a long hospital stay for a brain tumor.  For that project I went back to vivid memories of a childhood stay at Reading Hospital for appendicitis: how vividly certain things remain in the mind, in the confusion of delirious fever as a child.

Secondly, I visited the Móstoles hospital shortly after my wife Amelia died, and in the accumulated years of different hospital stays during her illness, the idea of therapeutic space was a constant theme in my mind.

Since the book will not be easy to find, I publish the full English text here. It follows a line of argument similar to that of my article for Record.

It may not be too much to claim that Rafael de La-Hoz's design for the King Juan Carlos Hospital in Móstoles demonstrates, as I shall try to argue, how the basic tools of architecture can be used to create a therapeutic environment conductive to the well-being of patients, a rather radical argument given the general state of contemporary hospital design. In addition, the project offers an innovative rethinking of how the complex technical apparatus of the hospital program can be organized, replacing the spreading horizontal facilities commonly built in Spain today for a compact volume that superimposes surprising discontinuities, while weaving them together through a warp and woof of horizontal and vertical communications, atria, light wells and other spatial voids.

Hospitals are places where people undergo some of the most important and traumatic experiences that life has to offer, from birth through sicknesses and injuries to death. And they are places where these vital experiences must be mediated through the daunting technical apparatus of the hospital machine itself. One of the goals of hospital design is therefore necessarily therapeutic: to create an environment that is conductive to healing and that promotes a sense of comfort, protection, dignity and well-being. The tools that the architect brings to this problem include the qualities of the materials used, considerations of space and light, geometry and form, proportion and measure, as well as the development of visual relationships in space, the management of social interactions, and more nebulous concepts such as the creation of a particular sense of place and community. Yet many of these questions are low on the list of priorities when hospitals are actually designed, given the great complexity of the technical issues to be resolved and the erroneous perception that attention to architectural values adds additional costs – a perception that the on-budget design of the King Juan Carlos Hospital would seem to refute.

The massing of the Móstoles hospital is organized as an abstract sculptural object on a plinth – in this case, two glass drums containing the patient rooms stand on the technical services block. This is the typology of Jrrn Utzon's Sydney Opera or Rafael Moneo's Kursaal Congress Center in San Sebastián, taken in turn from the Greek temple. Conceptually, the plinth is an artificial raised ground plane, which raises the building to engage it in dialogue with the surrounding topography, a gesture particularly important in the anonymous contemporary landscape of this dormitory suburb. The hospital must be instantly recognizable from a passing car on the adjacent A-5 highway, as indeed it is, the thousand eyes of its glass drums glistening in the light. And this diagrammatic image clearly explains the organization of the building to any newcomer, while the white color of the plinth's horizontal banding, and the light-filled reflections of the glass sheaths above, offer subliminal cues about hygiene, care and healing.

Notably, this initial image of the building is abstract. The horizontal banding of the plinth, and the diamond pattern of the molded sheets of glass sheathing the drums, mask the window openings behind them, breaking our usual anthropomorphic associations –the building as a kind of face and so on– and creating a certain air of mystery and attraction. De La-Hoz transforms the materiality of the finishes into patterns of light, shadow and reflection, a strategy that might be traced to Islamic concepts of ornamental pattern. This abstraction also offers the first sign that, like the private spaces of Spain's Islamic cities, the building is organized around a series of inward-looking realms.

The monumental scale of the building becomes apparent on entering the soaring atrium of the plinth, the first of these self-contained worlds. Despite its crisp, clean finishes and clarity of organization, the space is rather Piranesian in impact, crossed by bridges and with natural light sifting down from its lofty circular skylights. This is one of Madrid's most memorable public rooms, comparable in function to great halls such as New York's Grand Central Station, a meeting point or crossroads surrounded by entries and activity on all sides and built at a grand urban scale. It is quite a surprise to find this dense urban concourse in the outer Madrid suburbs; it provides precisely what is lacking in its surroundings, where the fluid movement of the automobile dissolves any sense of urban focus.

The bold simplicity of the plinth's interior organization –three parallel bands, practically independent buildings in their own right, separated by the atrium and a light court– is impeccable from an operational point of view, perfectly relating outpatient facilities and emergency services –as well as patient rooms above– to the technical core (operating rooms, x-ray and diagnostic areas, ICUs, etc.). The outpatient wing is the most insular and yet the most public of these bands, with every waiting area overlooking its own interior light well. The separation into three bands recalls the organization of Rogers and Lamela's Terminal 4 at the Barajas Airport, where movement through the open hall is interrupted by long trenches across its full width, which mark points of transition to and from the planes. Here in Móstoles this division is equally procedural, as patients move from the emergency or outpatient areas to the core for diagnosis and treatment.

The natural light that filters down from the circular skylights in the ceiling of the atrium already draws our attention upwards towards the glass drums above, where patient rooms line two semi-enclosed patios. One can feel the weight of these volumes above, just as in Grand Central Station one can sense the shadowy closeness of surrounding towers.

From the regular, orthogonal spaces of the plinth, elevators bring users up into the organic-shaped patios of the drums and their accessible gardens, another surprising inner world. Instead of a windowless hospital corridor, patients and their families find themselves in a transparent, aerial egg or womb, which embraces them in both a protective sense and in the sense of including them in a larger community. The artificial ground plane of the gardens feels almost celestial, like the moment when an airplane breaks through the upper level of cloud cover into a clear sky, though again the natural light is filtered through the tilted shading canopies to create, together with the wood plank floors, planters and seating, a more intimate and habitable space. In spirit these spaces are cloisters, places of repose, tranquility and protection.

The structural discontinuity between these two vividly contrasting realms is made possible by an intermediate service floor, where the vertical loads of the glass drums are transferred horizontally into the plinth, and where mechanical services are positioned to efficiently serve both. The transition is filtered through the regular grid of circles on the roof of the plinth, which are punched through as needed for skylights and vertical circulation tubes.

In his Madrid campus for Telefónica, Rafael de La-Hoz reinterpreted the classic suburban American corporate headquarters of the 1950s and 60s through the Mediterranean type of the patio. While the American corporate campus subliminally took as its model the English country estate, in the hands of De La-Hoz it became an essentially urban space, a Plaza Mayor. In the case of the King Juan Carlos Hospital, De La-Hoz again organizes the building around the idea of the patio, with the innovation of vertically superimposing two radically different configurations. The result reminds me of certain pre-Civil War buildings in Barcelona's Eixample, where the multiplication of light wells and courts, intersecting with the monumental entry and main stair, transforms the dense, multi-story building into a Piranesian amalgam of indoor and outdoor space, porous, humid, shadowy and mysterious, with its ambiguous mixing of communal and private spaces. In the case of the Móstoles Hospital, I think it is worth pointing out, as a form of conclusion, that this rich sense of porous density, urbanity and community is also the result of the insistence on bringing natural light into every corner of the building – even the baths in patient rooms have windows. Such a preoccupation would be unthinkable in the design of any hospital in the United States, even a luxurious private clinic, though it is a lesson they would do well to consider.

I developed my blog entry on the opening of Donald Judd's loft to guided tours for the travel section of the El País newspaper.  It appeared on July 5th with the title Minimalismo al máximo. You can read it in full here (in Spanish).

Posted by David Cohn at 6:03 PM No comments:

Constructivism on the Vía Júlia


The July issue of Architectural Record features my article on rental housing for senior citizens built by the city of Barcelona and designed by a trio of young architects there. It is one of those projects commissioned before the economic crisis and finished after, although unlike many it is occupied and doing well. Its young designers, meanwhile, are doing other things. 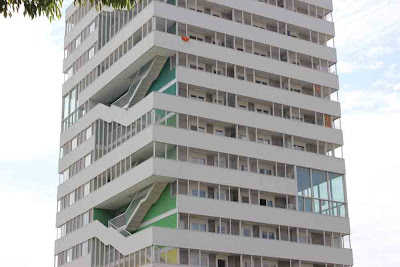 
"The design ... starts from a premise as boring as that for a speculative office block: a reinforced-concrete structure with a ... repetitive horizontal ribbons of openings and spandrels finished in white corrugated aluminum. But the architects treat this basic volume as a neutral field over which they deploy a series of variations. The 77 units ... are pulled back behind continuous terraces, converting the facades into a sun screen. Outdoor stairs run down the other two facades, interrupting the spandrel bands with dramatic, Constructivist-looking diagonals that reveal planes of yellow and green behind them...." 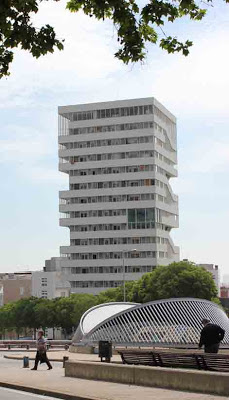 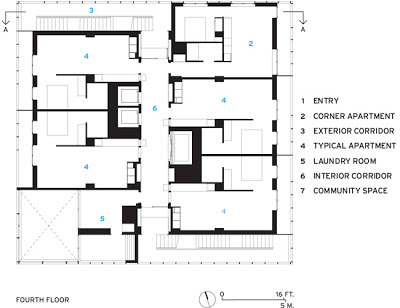 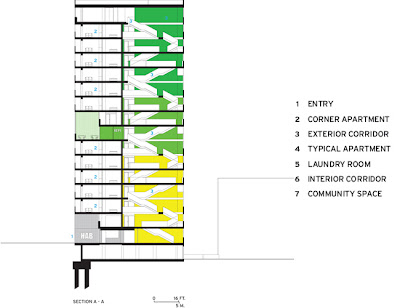 Posted by David Cohn at 2:33 PM No comments: