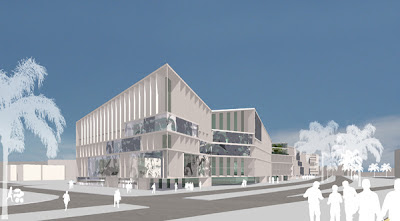 The City of Palma de Mallorca has halted construction on the waterfront Congress Center designed by Francisco Mangado. It made the decision after the request for bids from the private sector to operate the center produced only one submission, from Melía Hotels, which it found inadequate. The building has been under construction for several years and has accumulated a construction debt of 70 million euros. The city plans to finish enclosing the facades and wait for better times. 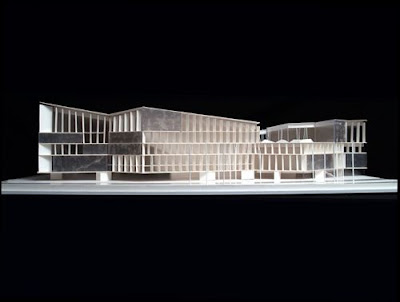 Rendering from arqa.com
Model photo from europapress.es
Posted by David Cohn at 2:19 AM 1 comment: 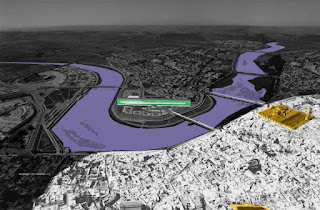 The Berlin weekly Bauwelt asked me to report on the cancellation of Rem Koolhaas' Congress Center in Córdoba, as announced by the city's new conservative mayor last March. The project was originally conceived in a 2001 competition and has long been bogged down in financing problems. This is a major loss for the city, but the project was not without problems as well -- a lose-lose boggle every way you look at it.

"Clearly Spain's local politicians have a lot to learn about how to responsibly manage large building projects. But architects, as accomplices in their wasteful building spree, are being held to account as well, as the profession enters a period of profound self-examination. Is architecture a plaything of the newly-rich (whether governments or individuals), a gaudy bauble, or does it have something serious and important to offer society?"


Thankfully though, historic Córdoba is still around: 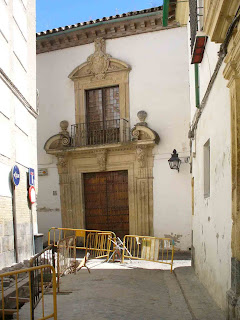 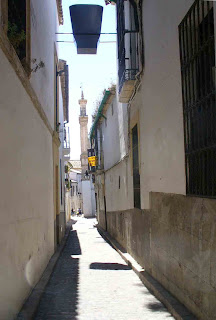 Posted by David Cohn at 3:02 AM No comments:

A Night at the Races 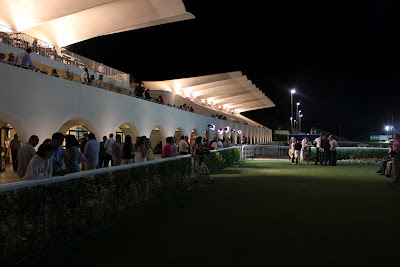 I inaugurate my new Canon SLR camera with this photo of Eduardo Torroja's magnificent grandstands for Madrid's racetrack, the Hipodromo de la Zarzuela outside Madrid, one clear, cool July evening last week. The evening races make the most of Madrid's summer climate -- the city is at an altitude of some 860 meters or half a mile above sea level, and the refreshing nights are when you want to be out-of-doors. People come just for the bars and food, but the races were a good adrenaline-booster for this newcomer.

And here's one of the reasons I went out to see them, an exerpt from my upcoming history of Spanish modernism:


"Carlos Arniches and Martín Domínguez opened their work even further to the radical structural experiments of Eduardo Torroja in their 1934 competition-winning design for the Zarzuela Hippodrome outside Madrid. Torroja's innovations in thin-shell concrete during the Republican years claim their place beside the pioneering work of Eugène Freyssinet, Robert Maillart and Pier Luigi Nervi. The Hippodrome design is dominated by his wing-like cantilevered shading vaults over the grandstands, which span nearly 14 meters and taper to a thickness of only five centimeters. The vaults are composed of hyperboloids, surfaces which curve in two directions, and are counterbalanced by an ingenious system that involves suspending the roof vault of the betting hall, situated below the grandstands, from tension bars tied to the rear flanges of the vaults." 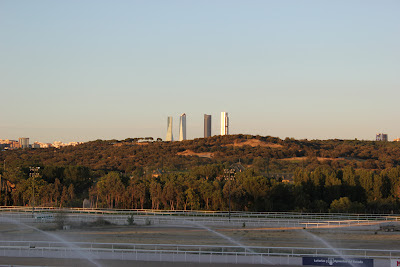 Above, the view from the stands of Madrid's new skyline, with 50-story towers by Henry Cobb, César Pelli, Estudio Rubio Álvarez Sala and Foster & Partners (left to right).
Posted by David Cohn at 11:42 PM 1 comment:

A Lazy Icon on the Riviera 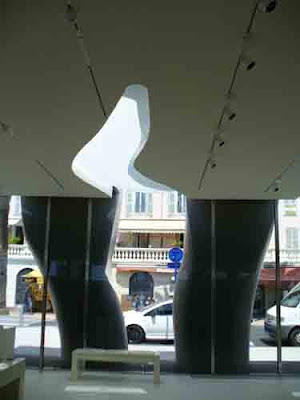 
"If there is any corner of the world less in need of a contemporary architectural icon, that place is Menton, a lovely seaside hill town situated 2.5 miles from the Italian border on the French Riviera. With its gardens, villas and picturesque historic center, Menton retains the charms that once attracted luminaries such as Aubrey Beardsley, William Butler Yeats or the French poet, artist and filmmaker Jean Cocteau (1889-1963). But when municipal officials began to court the American art collector Severín Wunderman, and offered to build a permanent home for his collection of 990 works by Cocteau, the wheels were set in motion to create just such an icon, a new building that, in the words of Deputy Mayor Jean-Claude Guibal, would give Menton 'the status of a cultural destination in its own right, where bold projects ennoble the spirit of the site and reinforce its authenticity.' "
(Read on)

Here's a general view from the magazine article, © Roland Halbe (used with permission): 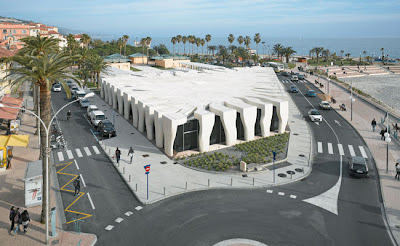