This June Madrid was the site for the European edition of the Solar Decathlon, a competition between teams from 17 universities to design and build the best-performing solar house (consuming only solar energy). The houses were erected in a new park on the banks of the Manzanares River. The event was sponsored by the Polytechnic University of Madrid with the support of Spain's Ministry of Housing and the US Department of Energy (previous editions have been held in the United States).
Projects were judged in 10 different categories. The top prize for overall performance went to the Lumenhaus, designed by students of the Virginia Polytechnic Institute and State University. Second and third prizes went to the Universities of Applied Science of Rosenheim and Stuttgart, respectively.
The 17 houses were open to the public for 10 days during judging and received 190,000 visitors. For more information in English, visit the Decathlon website.

More for Less: Congress on the State of Architecture

The debate on the post-crisis future of architecture was given an official forum in the Congress Mas por Menos (More for Less) held in Pamplona this month.

The occasion has served as an excuse for some journalists in the Spanish national press to join the campaign, launched several years ago by William J. Curtis, against the excesses of architecture over the past decade -- as usual, kicking the horse when its down. But this time the loudest and most strident voices have not prevailed over more serious reflections on the possible future of architecture offered during the congress and in the commentaries of its many observers.

Just for the record, a summary of the Congress: it was organized by the Fundación Arquitectura y Sociedad (Foundation Architecture and Society), founded by the Pamplona architect Francisco Mangado and with an ample list of national figures on its Board of Directors, including architects, politicians, journalists, and a variety of figures from other fields of study and other professions.

Four or five hundred architects and students gathered in the Baluarte, the auditorium designed by Mangado, to listen to three days of presentations and debates. Jacques Herzog and Renzo Piano presented their work under the theme "The Power of Architecture," followed by a debate between the two and Glenn Murcutt moderated by Luis Fernández-Galiano, one of the organizers of the Congress. In the afternoon, the former union leader José Maria Fidalgo presented the architects Rahul Mehrotra (India), Alejandro Arevano (Chile) and Giancarlo Mazanti (Colombia), whose work was grouped around the theme "Architecture and Shelter: Materials, Construction and Costs".

The second day included presentations by Anne Lacaton, Matthias Sauerbruch, Carlos Jiménez (Houston) and Victor López Cotelo (Madrid), on the theme "Architecture and Efficiency. New Programs and Sustainability". In the afternoon, Mark Wigley, Mohsen Mostafavi and the philosopher Slavoj Zizek debated the theme "Architecture and Pleasure: From the Aesthetic of the Icon to the Common Beauty".

On the last day, David Chipperfield presented his work at the Neues Museum in Berlin, and the architect Diébédo Francis Kéré of Burkina Faso presented some of his African projects (the architect is featured in the May issue of Architectural Record's GreenSource magazine). The Congress closed with a lecture by Glenn Murcutt and a debate between Fernández Galiano, Vicente Verdú of El País, Llàtzer Moix, the architecture critic of Barcelona's La Vanguardia, and the art critic Estrella de Diego.

Reports in Spanish on the Congress can be found on the webpages of Arquitectura Viva, Scalae. by Llàtzer Moix in La Vanguardia and by Antón García-Abril en El Mundo.

A sampling of quotes from commentaries on the Congress and the state of architecture:

Stepping Out on the Avenue 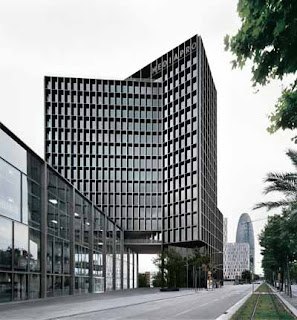 My article on the Mediapro Tower in Barcelona by Carlos Ferrater, Xavier Marti and Patrick Genard is featured in the May issue of architektur.akteull.

If we take a look at recent New York projects that return to the theme of the glass and steel building -Herzog and de Meuron's Bond Street condos, Jean Nouvel's Mercer Street apartments, or Richard Meier's Perry Street towers, among others- Mediapro stands out, unmatched in its formal elegance.