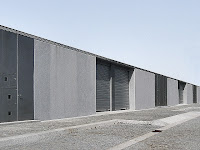 The site of Eduardo Souto de Moura's latest work, a luxury housing development in Porto, Portugal, is a typical example of the disconcerting juxtapositions and hidden surprises of the landscape around the city, the product of haphazard and seemingly zoneless growth.  The site was originally a vegetable plot on the grounds of "an aristocratic villa with a beautiful garden," in Souto's words, which overlooked a quiet estuary of the Atlantic Ocean near the beach resort of Matosinhos.  The estuary was later transformed into the busy freight port of Leixôes, replacing the silted river docks of the Douro in the center of the city, and Matosinhos has become a dense and growing bedroom suburb.  The old mansion and its gardens recently found new use as a setting for wedding receptions and the like, while its vegetable garden was sold for development.  The land has been divided into nine rowhouse lots on a trapezoidal parcel, and an odd triangular lot for which Souto has designed a larger and more singular house.  The houses occupy a raised and graded terrace, which is screened from the port by dense unkept undergrowth, and isolated from the villa and gardens behind it by old stone walls and a second rise in level.

One of the principal aims of the project, according to Souto, was to change the character of the site as little as possible, creating a setting in which "vegetation will grow up between the walls to merge with the neighboring gardens and fields."   This conservative impulse, however, has given rise to a radical design, in which the nine houses are completely sealed off from the outside by high windowless concrete walls.  Each house opens exclusively to a series of private courtyards that are concealed behind the walls.  From the exterior, with its discrete entries, the pairs of sliding metal garage doors that rise the full height of the walls, and the continuous metal cornice, the complex appears to be a high-security industrial facility rather than a privileged residential enclave.

There may be real concerns for security at the site, given its proximity to the port and its isolation.  The industrial exterior camouflages the buildings among the nearby warehouses and factories.  But there also seems to be a deliberate intent to shock in the uncompromising harshness of the exterior, an urge to see just how far the Modernist dictates of reason can be carried against our unconscious aesthetic preconceptions about domesticity.  After all, Souto might ask us, what really distinguishes this development from an industrial facility?  – not the rational division of the site into parcels, not the search for economy and efficiency in the construction, and not the promoter's search for profit.  Only the interior content is different: a series of domestically-scaled spaces and gardens rather than a high open warehouse.  But at the same time, the glimpse that we may catch, behind one of the mute metal entry doors, of a small entry court with its plants and welcoming portico, provokes in us an irresistible curiosity.  Souto has reduced domesticity to its essential condition, to a mysterious interiority in primary relation to nature.

Each unit unfolds around three courtyards: the entry court, a central light court for the three bedrooms and interior spaces, and a large rear garden, opening from the living area and kitchen through sheer glass walls, and featuring in larger lots a swimming pool and bathhouse.  Just as the entry court attracts us, the rear garden also acts as a lure, drawing the visitor through the house and casting its interior spaces into dynamic flow, an effect similar to that found in the compressed indoor-outdoor spaces of a walled Chinese garden.

The bedroom circulation hall and a bathroom are naturally lit by small skylights, contributing to the sensation that the houses are nearly underground, and that the main openings to the exterior are horizontal, to the sky, rather than vertical windows.  Souto underlines this impression when he describes the construction as "three horizontal strips of concrete, which act as roofs, supported by the party walls," a concept clearly legible in the roof plan and in overhead views.  In this respect, the houses are simply the spaces created by overlapping two levels of the garden's terraced terrain.

The houses are designed of course in open homage to Mies van der Rohe's unrealized Court House projects of the 1930s.  This is evident not only in the interpenetration of interior and exterior spaces within common walls -- the interiors also suggest a Miesian free space in the circulation pattern and the articulation of a few key walls and windows as floating vertical planes.  Moreover, Souto takes as his own a Miesian minimalism and respect for the detail, seen in this project in the carefully studied encounters between elements, and the fine finishes, custom cabinetwork and other luxurious appointments, including the carefully-tended full-grown plantings in the exterior courts.  This open invocation of Mies characterizes all of Souto's work, although in many previous projects he has given the Miesian vocabulary a rugged local character through the use of solid walls of native stone, as in his 1990 Casa des Artes cultural center in Oporto, and several of his famous residential designs.

Certain personal reasons could account for this approach.  In his advocacy of the expensive detail over the grand gesture, and his wish to leave the site undisturbed, Souto seems to be disguising or displacing his creative ambitions, an unusual trait for a talented architect.  It should also be noted that Souto, now 47, is a close friend and colleague of his mentor, Álvaro Siza.  His refuge in Mies and the Miesian detail could well be part of an intent to escape Siza's powerful influence, in a curious variation on literary critic Harold Bloom's theory of "The Anxiety of Influence" between master poets and their disciples.

But at the same time, Souto actually situates himself quite far from Mies' lofty search for perfection.  He once told an interviewer, "Architecture is very limited. Buildings are rarely the product of an architect's ideas; they are the result of legislation.  There are rules for dimensions, for layout, for building systems, and, with exceptions such as cathedrals and museums, the idea of the space ends up corseted.  For this reason I concentrate on the details, to try to move one emotionally without failing to meet the norms."  This severe curtailment of the scope of architecture places Souto in a more contemporary position.  The totalizing revolutionary premises of Mies and the other figures of the early Modern Movement, the idea of the work of architecture as a prototype set in abstract space, yield here to a more realistic, modest, and defensive stand, in which the work of architecture must find a place for itself in the limited context of contemporary development.

In this sense, then, the understated character of Souto's intervention can perhaps be best understood in relation to Porto's special character.  In the disparate juxtapositions of its ex-urban sprawl, its mixture of old villas, small industries, abandoned vegetable plots and new development, all brought together, softened and harmonized by the overgrown local vegetation, Porto could be said to resemble a grand but neglected garden.  In this landscape, Souto's buildings seek to nestle invisibly into an overlooked corner, to bring housekeeping, harmony, and a sense of mystery and light to the modest bit of the grounds in their charge.  This image, of the untidy garden as a humanizing ideal, which is also close to the heart of Siza's Porto work, is one of the most interesting responses architecture has yet to offer to the challenging landscape of unbridled urban growth. 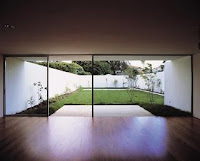