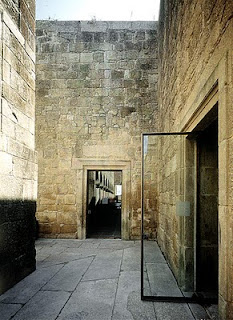 The Pousadas or Inns of Portugal, a chain of state-owned luxury hotels, are one country's answer to an enviable but difficult problem: what to do with a surplus of obsolete medieval castles, Renaissance palaces, Baroque monasteries and the like. Twenty-two pousadas in adapted historic settings (as well as 21 more in entirely modern structures) are scattered across the country, often in remote rural settings and national parks. Small, usually with fewer than 30 rooms, they serve tourists making the rounds of Portugal's historic sites, as well as hosting wedding banquets, small business retreats and other events. While not highly profitable in themselves, they form a prestigious support network for culturally-based tourism, and help maintain a priceless architectural patrimony.

The Pousada of Santa María do Bouro, the latest addition to the chain, occupies an imposing 18th century Cistercian monastery in the tiny rural village of Bouro -- a handful of houses above the lush banks of the Cavado River. Originally founded in 1162, the monastery was rebuilt several times; the present structure dates to the 18th century, and is attached to a church that is still in use. Today, the Pousada serves visitors to the ancient northern city of Braga, ten miles to the west, a religious center famed for its historic churches and Easter Week processions.

The hotel's 33 rooms are arranged around two open spaces: a U-shaped court planted with orange trees, and the cloister one level above, restored as a free-standing circuit of arcaded walls. Guests sleep in the austere modern equivalents of the monks' cells, and dine in the former kitchens, where the pyramidal brick chimney of the ovens has been transformed into a monumental skylight. A new service wing for the laundry, kitchen and mechanical plant has been built against the lower flanks of the southern facade, its roof acting as a terrace to the public rooms off the cloister. A tennis court and small oval swimming pool can be found on the semi-wild grounds, with their ancient paths and stone walls.

When architect Eduardo Souto de Moura began work in 1989, the monastery was an overgrown ruin beside its intact church. Its decline had begun in 1834, when the state seized and auctioned church properties, and little remained but its crumbling walls, without roofs or floors. Souto (Porto, 1952) won the commission largely for his experience in traditional stonework. A student and frequent collaborator of Álvaro Siza, he has designed several private houses incorporating new and rehabilitated stone walls. Souto labored for three years with skilled masons on the ruin, consolidating the walls and rebuilding large parts of the upper floor, the cloister and the dining room.

Souto chose not to attempt a literal restoration of the monastery to its original 18th century state. Rather, he took the ruin as his starting point, and decided simply to make it habitable, using the modern means at his disposal but with all due respect for the remains. He sees this approach as consistent with the development of the monastery over eight centuries. "The natural evolution of historic buildings has always been to serve new functions, to be manipulated and transformed without any moral implications," he maintains. "What charms us about the historic city is this layering of different voices."

For the reconstruction, Souto introduced a series of minimal, carefully-detailed elements. To stabilize the walls laterally, the lost wood beams and joists were replaced by an exposed corten steel deck of his own design. A frame of horizontally-laid I beams is topped with steel plate and concrete and anchored to the walls, with raised wide-plank wood flooring above. The missing pitched roofs were replaced with flat decks covered with insulating earth and seeded with ground cover. Souto also designed the yellow brass window frames, which are virtually invisible from the exterior. They are set on the inside of openings, without sills, so as not to interrupt the stone, draining via an internal channel and a weep to the outside.

Souto initially planned to distinguish new masonry from existing, but during construction he abandoned what he calls "this Manichean idea" and began to "dissemble the new on the old, which is dominant." He used traditional sand and lime mortar, and recovered fallen blocks of stone on the site in order to match the color and texture of existing walls: the well-trimmed blocks of the main floor with its Baroque window openings, and the more irregular stone on the upper floor, with corners and windows neatly framed. The new service wing is dressed in a more rustic grain of large irregular blocks and more open joints. It is thus clearly legible both as a modern element and as a semi-buried podium, closer to the rough stonework of retaining walls and country fields than to the fine masonry of the monastery.

In the interiors, the missing floors made the introduction of elevators, piping and other services relatively easy. Souto had more problems with the air conditioning, "obligatory for a five-star hotel but against the nature of a centuries-old building" in his opinion. Large ducts under the main floor deliver air via discrete perimeter grills. In the guest rooms, air units supplied with chilled or hot water from the roof are hidden above the bathrooms, which read as free-standing cabinets. The minibars, another difficult requirement in the small guest rooms, are recessed in cavities chiseled out of the thick stone exterior walls.

Souto's intention in these details is to make the resolution of the design problem seem natural and effortless. In fact, the reconstruction is full of invisible extravagances -- an original monumental stone stair in the west wing, disassembled and moved a pair of meters to comply with fire-safety codes; or an air duct big enough to stride through at full height, which is buried under the orange trees of the U-shaped court. Low labor costs and surviving craft traditions permitted a quality of materials, finishes and workmanship that would be difficult to match elsewhere, although Souto attributes this difference to questions of "tradition and culture" more than expense.

This severe monastic retreat seems to rise from its site like a prehistoric monument, a man-made artifact almost lost to nature. Souto's reconstruction is full of echoes of its former abandon: the flat roofs overhung with bits of vegetation, the roofless cloister, the dark window openings, some with their sky-blue blackout shades drawn as if bits of sky could still be seen through the structure. It comes as something of a surprise to find a brightly colored beach towel hung out to dry in one of the windows, or to watch a pair of children scampering down a cold stone staircase to the pool -- signs of a magnificent ruin come to life.